The story of how letterpress designs come from their creation on antique presses to be consumed, printed-to-order on a kiosk is a wild testament to modernity. As we appreciate the handprinted quality and vintage nature of letterpress designs, we must pay tribute to their roots and the people who preserve them. I talked with two Card Isle artists who specialize in letterpress: Violet O’Brien of Violet Press & Paper and Julie Toles of Hedgehog Press about their letterpress love and knowledge.

Both Vi and Julie speak of being taken in by printing’s rich history. Their practical and scholarly education in letterpress sets them in pursuit of proficiency in the tools of the letterpress’ origin. Julie connects to the history of letterpress through the physicality of its process: “I really love all printmaking processes due to the technicality that comes along with them. There is a lot of prep and set up work in addition to clean up and I like that those parts of the process just become part of the art you are creating. I also have always love machinery and the presses have a beautiful allure to them.”

For Vi, an attorney by training, her exposure to letterpress was the result of a search for a hobby. Vi happened upon the L Letterpress tool in a clearance section of craft store. The L Letterpress is meant to simulate actual letterpress. It is used in conjunction with an embosser tool which displaces pressures over inked plate and paper. Vi tinkered with the L Letterpress, researched letterpress history, took a class, and was smitten. It combined her love of drawing, paper, and antiques. Letterpress quickly became more than a hobby.

My introduction to letterpress through Vi and Julie stoked an interest in letterpress history. I may be a bit susceptible as a seeker and nostalgic, but I found it was easy to get swept up in the mystery, misconception, invention, personalities, and politics of printing history.

The beginning of moveable type came way before Johannes Gutenberg, the inventor credited with devising the printing press in 1450. Moveable clay type was invented in 13th century China; metal moveable type came along in Korea in the 13th century. Surprisingly, neither found a strong foothold among printers in Asia. The reason was  that moveable type was not a necessity. Given the vastness number of characters in the Chinese language, type only needed to be created as characters were used in text. Additionally, prints were largely religious tomes and reprinting them was as easy as taking out a previously carved block with the entirety of the passage. Done. No danger of opening the door to errors by resetting type for a new edition (1).

Meanwhile, in the west, monks and other scribes copied text by hand on animal skins. Gutenberg’s press emerged sometime between 1450 and his first round of prints: 180 copies of the Bible were completed in 3 to 5 years in around 1454. The details are a bit fuzzy because little is known about Gutenberg outside of his money troubles. He borrowed lots of money and was frequently sued by his patrons. Mostly notably, Gutenberg was sued soon after completing his printing press when he could not repay his loan. He had to surrender everything, probably including his printing equipment. At one point when developing his conception of the printing press, Gutenberg learned winemaking to support himself. He actually based his wooden ‘screw’ or hand press after a wine press. He used his background as a metalworker to make typefaces. For these, Gutenberg most likely poured molten metal into impressions in sand. The first books printed were 180 copies of the Bible which took Gutenberg and his staff of 20, 3-5 years to complete. What with the consuming tasks of creating sand-molds and then composing type, manually working the lever of the press, and hand feeding the parchment for all 1,286 pages of each copy, the project of printing the Gutenberg Bibles was a Herculean feat in that time period (1). Contrast the project of printing the Gutenberg Bibles to the relative ease with which a complete beginner can create multiple prints using a craft tool like the L Letterpress. The developments in printmaking are astounding. The use of the Gutenberg’s printing press spread soon after the completion of the Bibles despite the widespread illiteracy of the European populace. In fact, the printing press set into motion a cascade of mass knowledge transfer. The affordable and accurate production of printed material led to dissemination of the written word and spurred the Renaissance, the Scientific Revolution, and the Protestant Reformation. Presses along with more durable, readable type helped to standardize and spread the English language. Iron hand presses, platen press (operated with a foot pedal or outfitted with a motor) and eventually fully automated Heidelberg presses came about and improved upon Gutenberg’s original press (1, 2). Creators of typefaces and advancements in printing like, Caslon and Baskerville, are memorialized in word-processing softwares as fonts (3).

Vi and Julie started their studios when they bought their very own antique presses. Julie bought a Columbia No. 2 table top press. Vi purchased a table press and eventually upgraded to a motorized platen floor press. Vi’s floor press, a massive iron machine, affectionately named Spud, launched her into needing a studio space; she bought the entire contents of an established letterpress shop and outfitted a studio in Chicago. Vi operates her growing business largely by herself with the support her husband and a couple friends. Spud was tragically totaled in Vi’s relocation form Chicago to Colorado. She is currently restoring and getting acquainted with his successor, Dorothy the floor press. Vi talks so sweetly of her relationship with her presses. I imagine it is not unlike that of a classic car enthusiast and their prized cars. Letterpress artisans of today remain steeped in the magic of their craft by operating machines that have lived many lives before their modern owners. As Vi relates, “I love the traditional way of printing because it feels like going back in time It also feels like preserving a craft.” Julie says she refuses to buy new presses because she loves the romantic nature that vintage presses retain. Both artists use antique type and printing blocks when are they are doing full-on traditional style printing. Type must be laid out on a composing stick with great attention paid to the tension between the characters and the spacings between words and lines. Julie sees the challenge of type setting as part of her mission to help educate about antiquated printing techniques. She brings vintage type to workshops, museums, and schools where she watches newcomers to letterpress rethink the way printed material was created before the technology they use everyday. Letterpress attracts passionate, intelligent designers. The craft involves dealing with incredibly heavy and finicky machinery, mixing colors by hand, adjusting and aligning and testing and perfecting and that is just the production end. Involving personal artwork and custom designs has a whole process in itself and letterpress has very finite, rules of conduct. Different colors require separate plates and the translucent ink has to be layered and aligned ever so carefully for different colors to register as touching. Letterpress is best for the application of solid color so shading is conveyed with cross hatching and halftones. Halftones use tiny dots of different colors to create the effect of gradients (4). Playing within these bounds is difficult; letterpress printers become masters of sight and texture. The making of a full color letterpress print by Vi O’Brien of Violet Press and Paper, card available on Card Isle kiosks (Photo by Vi O’Brien)

Today, the type’s impression upon the paper arguably encapsulates the wonder of letterpress. The bite, as the impression is called, manifests how letterpress artisans can produce images of impressive diversity within the bounds of their craft’s seeming limitations and yet all their work is branded with a signature letterpress feel. Vi, Julie, and many other modern letterpress printers gravitate to letting their type bite the paper. As Vi shares, “To me, it is really because I love the tactile feel of the image being pressed in. I also think it distinguishes letterpress printed items from digital or offset printed items, which cannot accomplish a bite.” Letterpress printing is tactile from beginning to end: deep history, deep printing. Wedding Invitations by Violet Press and Paper, notice the bite in the paper and the painting of the edge (Photo by Vi O’Brien)

The letterpress community is an open and enterprising one. Artists like Vi and Julie remained committed to mastering their craft, sharing its history, and nurturing themselves in the process. Vi describes this effect, “It’s just one of those things you find and then wondered how you ever lived without it.  When I am designing or printing, I feel like time stops. I get so entranced in what I am doing, that hours can go by without my realizing it….To get to pursue something that makes you feel like that is really amazing.” Even in an age of digital printing, the link to the past can be preserved. Card Isle is honored to be a part of bringing letterpress to the masses. Lend a hand; ask an artist about the story behind a piece you admire. Bear witness to the connection dedicated artisans offer to the world.

Thank you to Vi O’Brien of Violet Press and Paper and Julie Toles of Hedgehog Press for their thoughtful responses to my interview questions and their beautiful work in the world of letterpress. 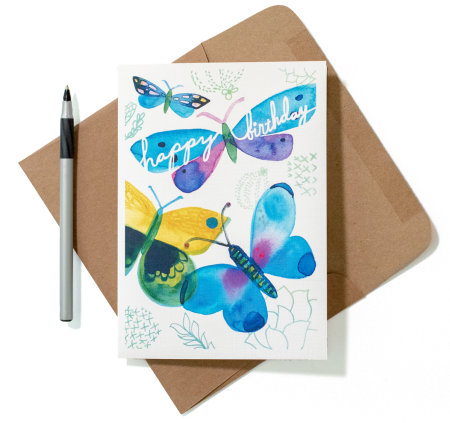 Add to Cart
Next
Back